The Big Question: What are people using after the plastic ban at events?

Not many people know this but the first ban on single time used disposables was implemented way back in 1998 in Sikkim but no one really followed it. Cut to 21 years later, 26 states have already banned single use disposables and we are still on the lookout for a solution.

Understanding that there is a need in the market for brands and events, we came up with a solution, Cupable - India's first cup brand which designs, manufactures & recycles products along with implementing reusable systems which is good for our planet. 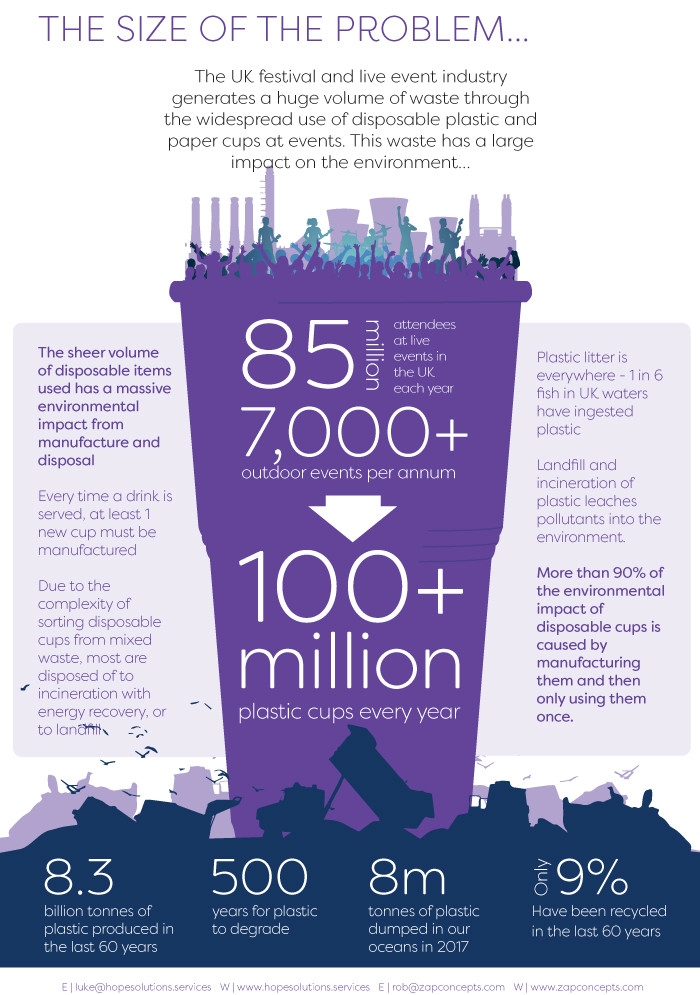 Tapped Craft Beer Festival is India's first craft beer festival which started in 2014. The motive of the festival is to promote local breweries and give them a platform to sell their beer to a niche audience with purchasing power. The sixth edition of Tapped took place on the 10th of February, 2019 at Mahalaxmi Race Course. Cupable partnered with Tapped 6.0 as their sustainability partner and was tasked with handling the drink ware. The following document is a list of challenges and how Cupable worked in tandem with the event organisers and festival attendees.

Challenge 1: A durable cup for festival attendees to enjoy their drink in.

On June 23rd 2018, the Maharashtra Government implemented the ban on the usage of any single use plastics. This affected Tapped drastically since before the ban they used single use plastic cups to serve the beer in based on the linear model of make-use-dispose system. The alternative was paper cups which cannot withstand cold beverages and becomes soggy and inconvenient to drink from after a while. The other alternative was glass which becomes expensive and has huge breakage issues which can hamper a festival's vibe.

Cupable has designed a 100% reusable cup which can be used for a minimum of 150 times. Tested in the lab of TUV Rheinland (A German based company which provides product safety certifications), the cup is sturdy and engineered to serve cold beverages in which solved the issue of durability of the cup. 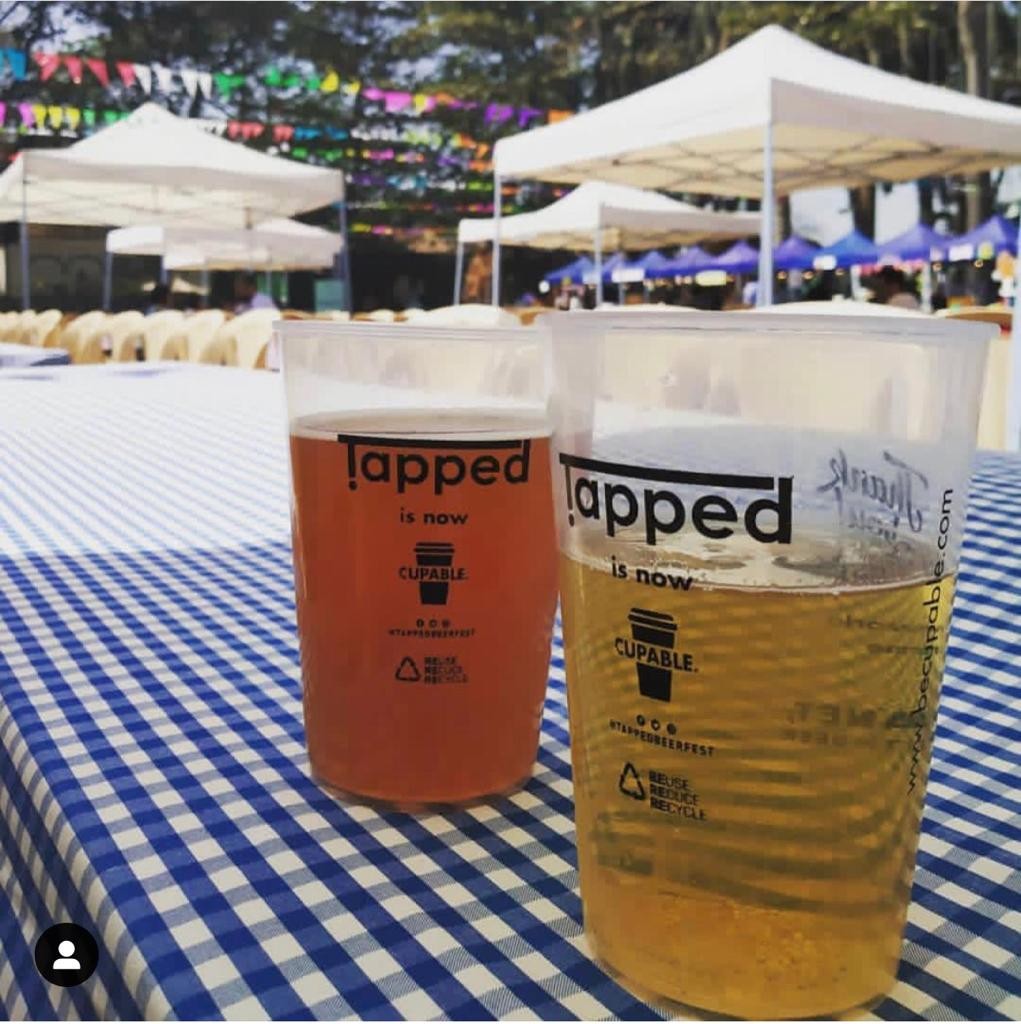 Challenge 2: Impact on the Environment

There has been a worldwide crackdown on single use disposables be it plastic, paper or any other material. 500 billion single use paper and plastic cups are sent to the landfill every year. Paper cups are not recyclable since it has a layer of polyethylene to make it sturdy which does not allow it to get recycled.

Cupable provided a cup solution to Tapped which is 100% recyclable and a closed loop cycle which ensures that the festival ends up as a Zero Waste Festival. Cupable Cups are proudly made in India in responsible factory conditions approved by the Maharashtra Pollution Control Board. This limits emission during transportation in comparison to the cheap, flimsy cups manufactured in countries such as China.

This translates to saving:

Now that is some quantifiable impact! Imagine the social and environmental impact if all events and festivals across India switched to reusable cups. 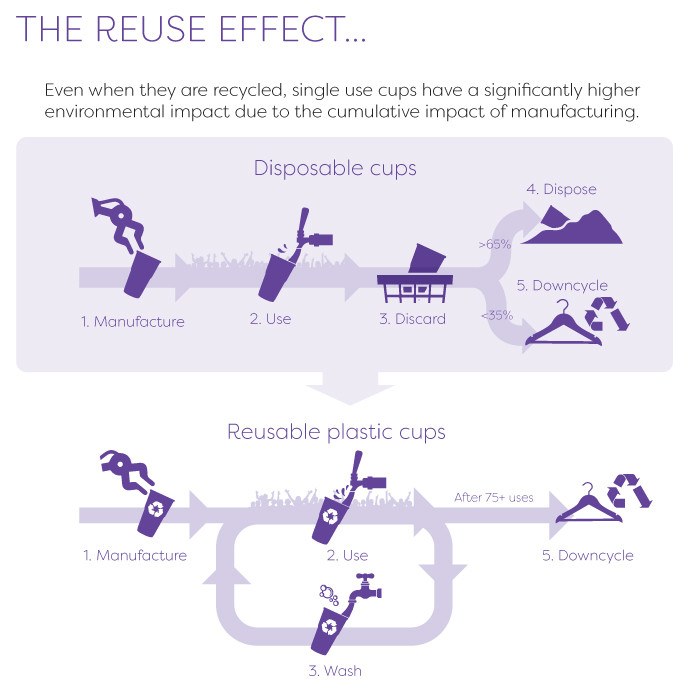 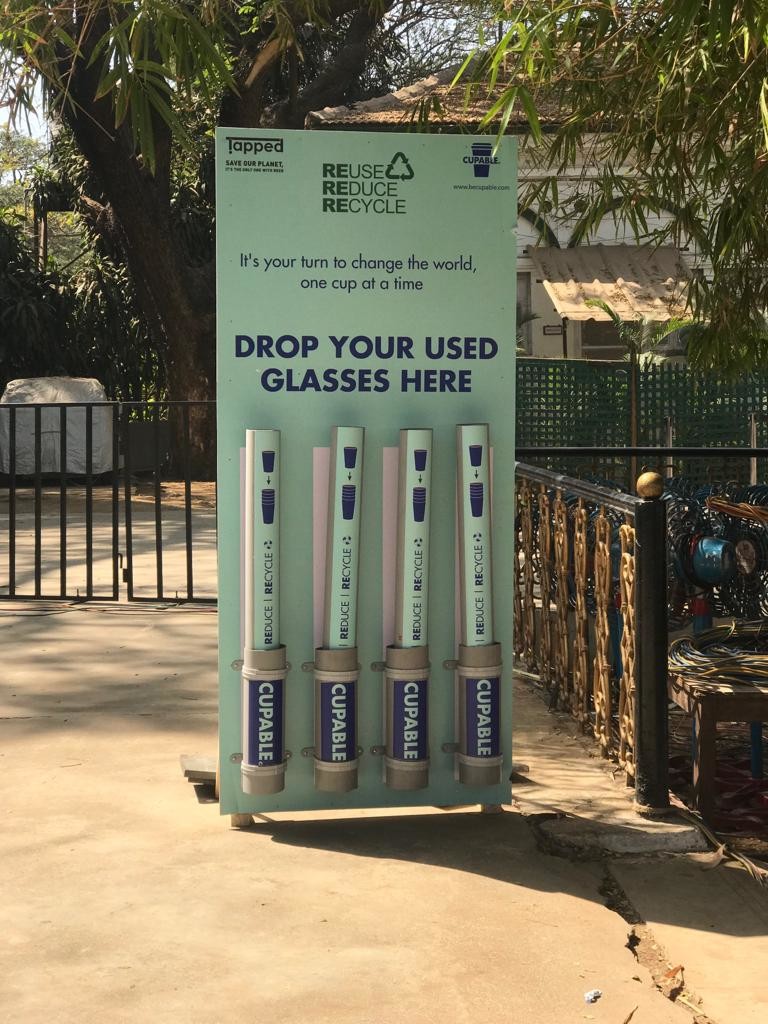 Not a lot of people are aware of the single use epidemic that we are facing. It was of utmost importance that people attending the event were aware of such a thing happening since their participation was essential. We had to put the point across for people to participate and accept this reusable movement or circular economy in action.

Cupable cups are highly customisable and we offer printing solutions in house. The following were the methods taken to create awareness:

- The glass was supposed to be our main medium of communication since it was going to be held in the hands of the 4,000 attendees throughout the day. We opted for a co - branded collaboration with the Reduce, Reuse, Recycle Logo on one side of the glass. On the second side we wanted to have an interactive text for people to feel a part of the change. Our text went like ‘Thank You for Changing the World, One Cup At A Time’ which incidentally is our company motto as well. We also added a quirky text which went like ‘Save The Planet, It’s The Only One With Beer’.

- Before the event, we posted an instruction sheet on our respective social media handles on the steps needed to be taken at the event.

-We had a sun board mounted at the entrance for every visitor to see how Tapped 6.0 was being sustainable. At the event our entire crew wore T shirts with the tagline ‘You Better Reuse Your Cup, We Are Watching You’ to imbibe the re-usability tone throughout the event.

- We also had a scoreboard at the exit to give it a game like experience for the attendees to get them involved of how many cups were collected. 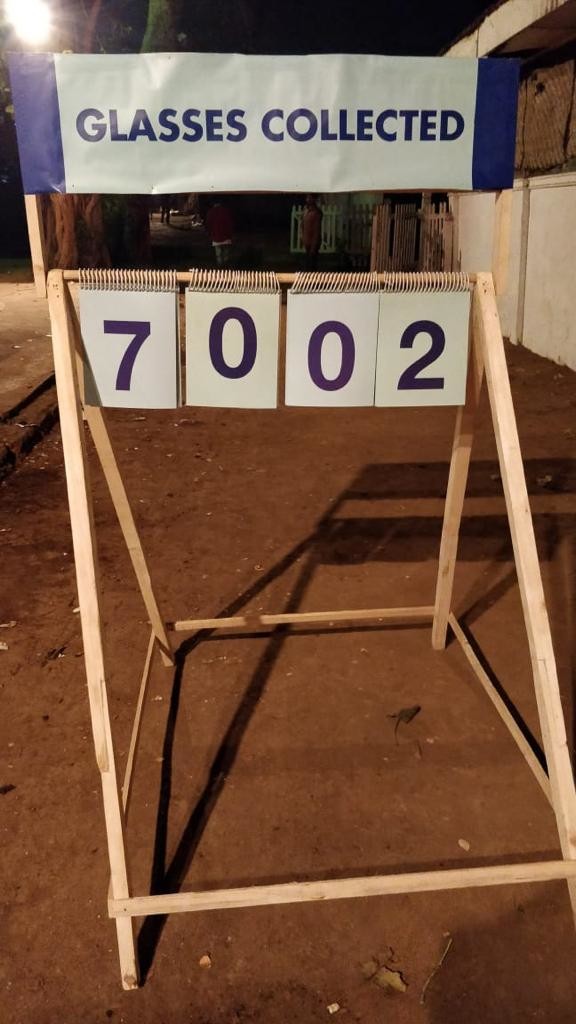 The feedback from Tapped and several other events was that collection of cups; cutlery and waste have always been a hassle. The cups needed to have a separate collection plan since it cannot come in contact with any other substance, be it food or cutlery. Segregation of products has always plagued governments, companies alike. Another aspect was washing the cups to enhance the re-usability experience.

Cupable developed unique cup deposit points which were strategically placed at different places at the event. The mechanism of this cup deposit point was pretty simple. We had developed six deposit points with an opening which allowed only cups to be deposited. This was mounted with brackets on sunboard and attractively decorated to be visible from far. Since our cups are easily stackable, the pipe was detached and then taken to our onsite washing station. We came up with a differential washing station which involved a 5 step process to clean and dry the cups thoroughly. 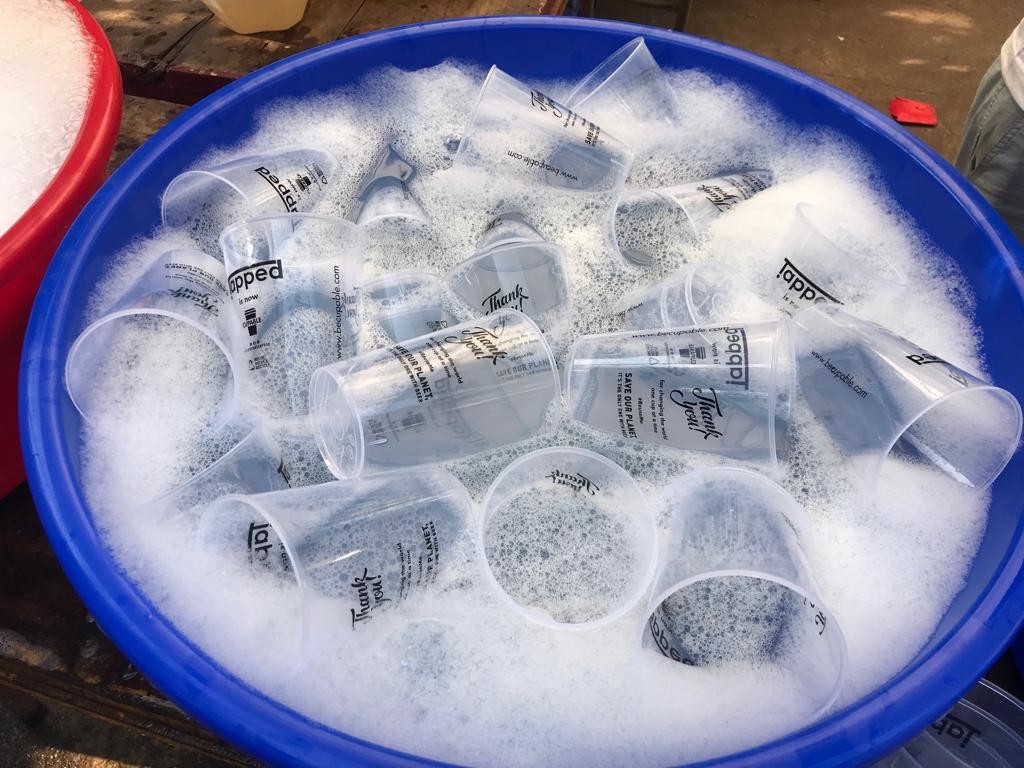 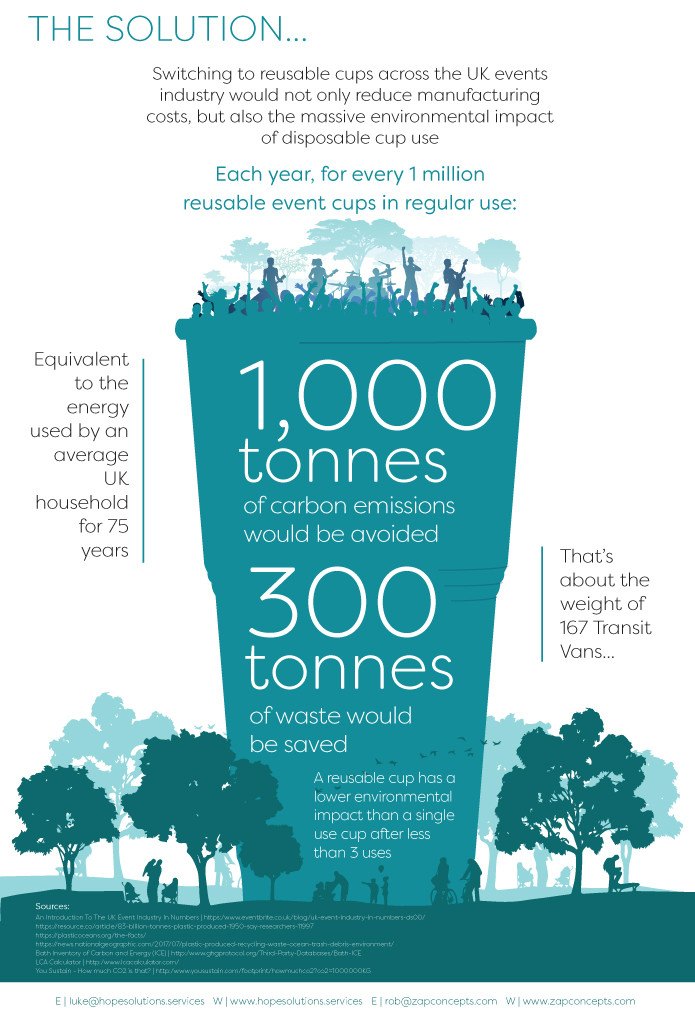 Overall it was a pretty successful experience. For a collaboration which started off as a pilot, it quickly turned into a validation that this model needs to be adopted across all festivals and events in India. Yes, there were a few issues here and there but when you are trying to change mind-sets, a little bit of inconvenience is warranted. We are far away to proclaim that we have created a 100% circular system but this was a step taken in the direction of changing the world, One Cup At A Time.

Atul Khatri, an Indian stand-up comedian, “You guys are doing a great job in the recycled plastic space; I have already seen your cups in a couple of events I have attended.”

Saumya Khona, founder of Tapped Craft Beer Festival, “Cupable has lifted a huge weight from our shoulder. Drinkware at events have been one of our biggest pain points. Love your enthusiasm and creativity to make a difference.”

Cupable is a company founded by a young team of 5 people. Three of us are below 25 and two of us have dived into the company right after graduation.

Earth Hour: What You Need to Know

The problem we should be talking about…

Environmental Challenges Over the Next Decade